Aged, stinky cheese is certainly an acquired taste. personally I love the stuff. A powerful deep veined Stilton with a glass of excellent port is one of life’s greatest culinary pleasures.

However, Italian researchers have discovered what may well be the oldest cheese ever discovered in a recently uncovered Egyptian tomb.

In June 2018, Egyptian authorities opened a sealed Ptolemic-era sarcophagus that was discovered in a building site in Alexandria. The sarcophagus has yielded a stunning if unspectacular treasure trove of information.

From an Archaeological point of view the discovery of a tomb in Alexandria was a suprise. The area had been written off as an area of interest, but the find has provided plenty of interest.

Once the tomb had been opened it revealed three skeletons sat in a red sludgy sewage of decayed human physical excrement. While this might have turn the stomachs of many, tens of thousands of people signed up to an online petition to drink the liquid from the black sarcophagus. 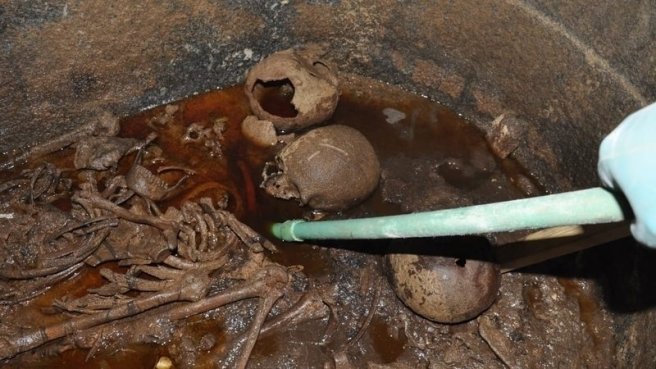 Despite the surprising amount of interest in what is a quite frankly disgusting idea, nobody will ever partake of the physical human seepage contained within the tomb.

However, an article in The Smithsonian website reports that among the messy sludge and bones, a solid whitish mass was found.

Following some analysis of the substance it was discovered that the mass contained the remnants of a dairy product, cheese.

This isn’t the first time evidence of ancient cheese making has been discovered, indeed, traces of dairy products have been found that are 7000 years old. But this discovery is the first to uncover coagulated milk protein casein, or cheese.

But before you cheese lovers start lining up the crackers and uncorking the port, this cheese was unpasteurized, so likely to host a whole list of nasty bacteria likely to cause illness or even death.

The real significance of this find, in bio-archaeological terms at least, is the potential discovery of  a bacteria called Brucella melitensis, responsible for the disease brucellosis. It’s believed that brucellosis was responsible for many deaths before the advent of pasteurization. Previously the oldest know evidence for his bacteria in food 750 years BC. This find would predate those finds by millennia.

Its rare to discover evidence of  an ancient perishable food stuff and one wonders what other edible delights lay uncovered beneath the building sites of Egypt.

Listen to our latest podcast:

Support what we do by making a donation